I got Prof a GPS for his birthday. I hate GPS units - that electronic voice, the routes that make no sense, all those cords cluttering up the dashboard... I'm more of a hit AAA the day before a trip and map out a route in highlighter kind of girl. So, he had his GPS, and I hit the AAA the day before we headed to Maine.

Because I have so many friends who live in the greater Boston area, I know the route by heart, but Serena, our chosen GPS voice, had way different ideas. I hated her from the first time she opened her little mouth to tell us how to get out of the neighborhood. Duh Serena. We know how to get to the highway from the house. Serena was insistent both on the way to Maine and the way back from Maine that we take I-95 the whole way, and take the George Washington Bridge in NYC. Serena is nuts, and obviously has no experience driving in the U.S. Anyway, my chosen route made her mad. She recalculated and recalculated and recalculated the route in a vain attempt to make us get to the George Washington Bridge. Ha Serena! I am SO much smarter that you. We ended up turning her off for a good majority of the ride up, until we got into unfamiliar territory. Turns out, the territory was also pretty unfamiliar to Serena too.

We took a detour off the highway to stop by to visit an old friend of mine who relocated to Maine several years back and lives in a cute coastal community about two hours from our final destination. I had a case of Yuenglings for him - apparently, beer from Pennsylvania is a hot commodity up there. He sent me his address, and we plugged it into the GPS. Surely Serena could get us from the highway to Maple Ave. Right?

So we followed her directions, closer and closer to town. Then she said "turn left on Maple Ave." Great, finally! We'd been in the car forever. But all that was on the left was a very large cemetery, with tiny little roads in between rows. So, we kept driving, looking for Maple Ave. Serena told us to turn around. So we did. And when we got near the cemetery, she told us to turn right onto Maple Ave. So we did. I thought, "ok." His house is just on the other side of the cemetery. Nope. No such luck. Serena told us that we had reached our destination as we pulled up next to a dozen small graves of children from an orphanage in the late 1800's. Then we noticed that all the little roads in the cemetery were named. And we were on Maple Ave.

I was laughing hysterically at this point, of course. Tears streaming down my eyes. My friend lives in a cemetery! I was vindicated! AAA maps rock. GPS sucks.

I call my friend, tears streaming down my eyes and ask him which grave was his. After some confusion, we finally figure out that he lives on Maple Street, not Ave. Maple Street, however, the street where the living people live, wasn't on the GPS map. At all. Nada. Nothing. In that town, Garmin has one Maple, and its a pretty exclusive address.

People are dying to live there.

(sorry, cheap punch line. I've been with Prof non-stop for a week. Its starting to rub off)

So, I dropped the beer, saw his new house, met his new girlfriend (complete with cats. Ha! Sucker.) and we made plans to have more beers later in the week in Bar Harbor.

Then we plugged in the address of our rental cabin in the GPS, crossed our fingers and took off to begin our vacation.

We took the scenic route up the coast to Bar Harbor. The sunset over the tidal rivers was gorgeous. The little lobster shacks, ice cream places, cute small towns, boats... Oh. I was in love already. And Serena kept us on the right track. She owed us after the great cemetery debacle.

At some point as the sun was setting, it dawned on both Prof and I that there was a possibility that we had been scammed. We reserved the cabin from a person off the internet who we didn't know. We saw pictures of the cabin, but, that was no guarantee that the cabin actually existed! Our instructions were that the cabin would be open in the afternoon and the keys would be on the table. What if it was there, but we had gotten the weeks confused? What if we got there and somebody else had gotten the weeks confused and we walked into someone else's vacation? Why didn't we consider these possibilities before we drove for twelve hours? So, we spent some time gnashing our teeth about that, as Serena patiently shouted turns at us.

Our cabin was on a major road, but, on a dark wooded stretch, and set back from the road quite a bit. But Serena got us there. AAA would never have been able to do that in the dark, so, at the end of the trip, Serena and I had made up. But I'm still a paper map girl. 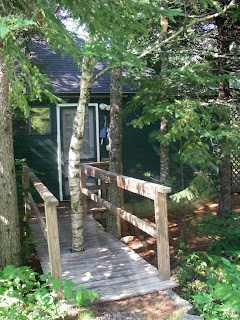 Email ThisBlogThis!Share to TwitterShare to FacebookShare to Pinterest
Labels: holidays, Random things that amuse me

I hate GPS, too, though I grudgingly admit that it occasionally comes in handy.

Also, the number one question I get from people when they find out I'm from PA is "Have you had Yuengling?" It's a good beer, but I had no idea how obsessed people are with it... especially people who can't get it locally. (We don't have it on the west coast.)