Struggling to be indifferent

Prof and I have been slowly working out way to signing a contract to build a new house. We aren't in any real hurry (until the homies come out) so we've been taking our time asking questions, considering options, weighing upgrades, adding them in, taking them back out and trying to find a price we are comfortable with. There aren't a whole lot of lots in the place we are looking, and only one that we really like. Its wooded on one side, so we'd only have neighbors on one side, and nobody across the street.

Well, its a pretty popular lot, given those things. And today we found out that someone else has put a contract in on it.

We knew this was a possibility, and we've still been taking out time, not wanting to rush into anything and regret it later. But now I feel this horrible feeling inside my stomach. Despite trying very, very hard to not get attached, I might not have been successful. I felt like that lot belonged to us - but of course, it doesn't.

The lot wasn't perfect - as we looked harder and harder, we found lots of flaws. Like, its really close to the railroad (within 500') - a railroad that blows its horn several times between 10pm and 4am. The woods next to it are also owned by someone else - they aren't protected or preserved in any way. Any day, the owner could decide to come in, clear cut the trees and build something super-ugly and/or noisy. That would suck.

So I'm confused about what to do and how to feel. Its hard to want to continue on with a house purchase in this market when you don't 100% love the lot you are buying.

So, I start off the week with a disappointment.

Here's a picture for you so you can share my disappointment too. The woods would have been to the left of the front porch, so I could sit there and sip my beer and chill to the sounds of birds. Or chainsaws. 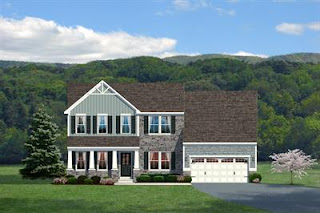